How do we create a livable city?

In November 2016,  Sensescapes co-created an urban laboratory in the temporary urban space Dome of Visions.  The laboratory was facilitated in collaboration with the research project Making Sense of Data and the urban consultant organisation Urban Goods. Our ambitious goal was to experiment with an interdisciplinary meeting between sensing bodies and data analysis, between the analogue and the digital, and our programme was centered in the fundamental question: How do we create a livable city?

Merging practice and theory, debate and exploration, the lab was open to both practicioners, theoretical experts and local citizens. The programme was a blend. See the whole program here and read Dome of Vision’s own article about the laboratory here.

A workshop in Embodied Mapping by researcher and choreographer Allesandro Carboni offered insight into his practice-based research through a game-like toolkit of how to map urban space with one’s own subjective body, remake and reconfigure it, and transform it into a subjective choreographed score for making a performance on stage.

A second workshop was facilitated by Sensescapes, as a curious exploration of the open urban area around the dome, at the waterfront, in the sunny and cool november atmosphere. Eight familiar and unfamiliar participants came to explore the space and transform the area through sensorial intervention. The frame of the sensorial workshop was simple as always: After a brief introduction, the participants paired up and tuned into each other’s presence for a moment. Then they set off to investigate impulsively together, hand in hand, without words. One was blindfolded, the other not. 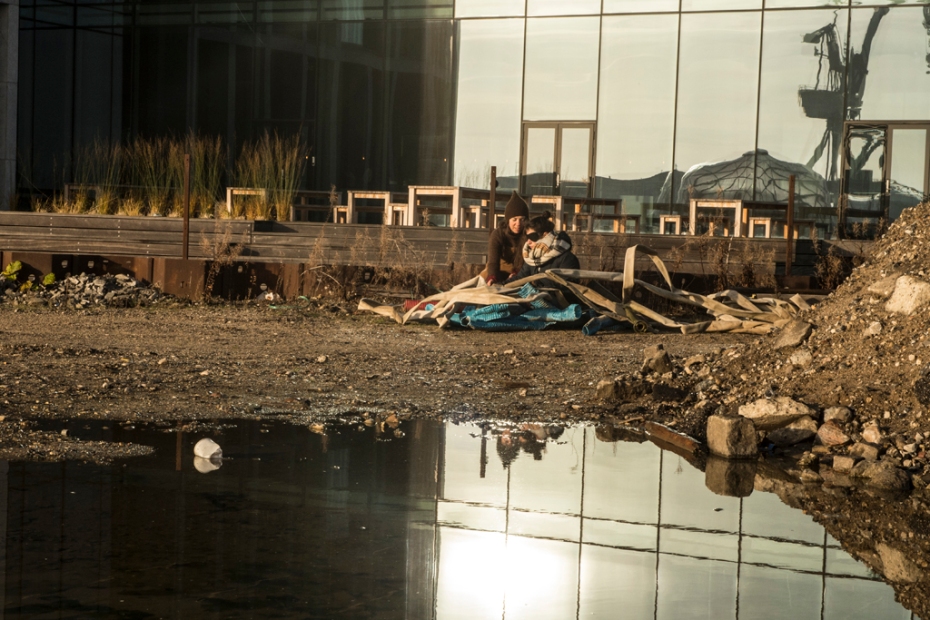 This time, a special emphasis was put on the equality of participation. In any game, so much power lays in the few sentences of instruction! In the intro, the participants were asked to act on their impulses, no matter if their were blindfolded or not. The intention was to create a clear frame for potential curiosity and action to grow. Instead of a blind citizen, waiting for a seeing guide to lead them somewhere, the couples were encouraged to become one joined, impulsive, investigative, playful body.

This lead to impulsive exchange of roles… 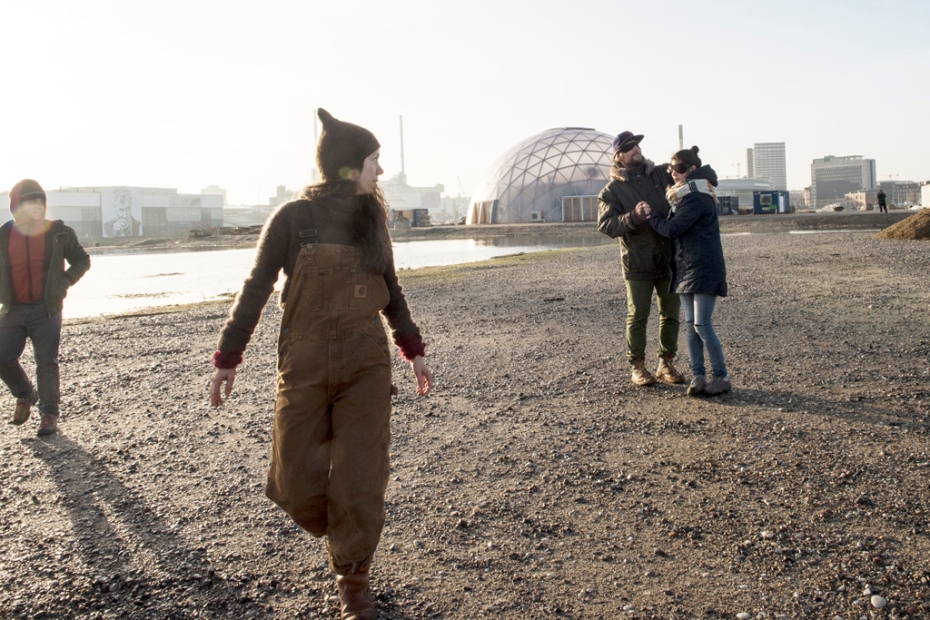 We had a lot of fun!

In a second workshop round by Sensescapes, four bodies explored the inside of the dome individually, sinking into a deeply personal space of sensitivity and sensorial meditation. 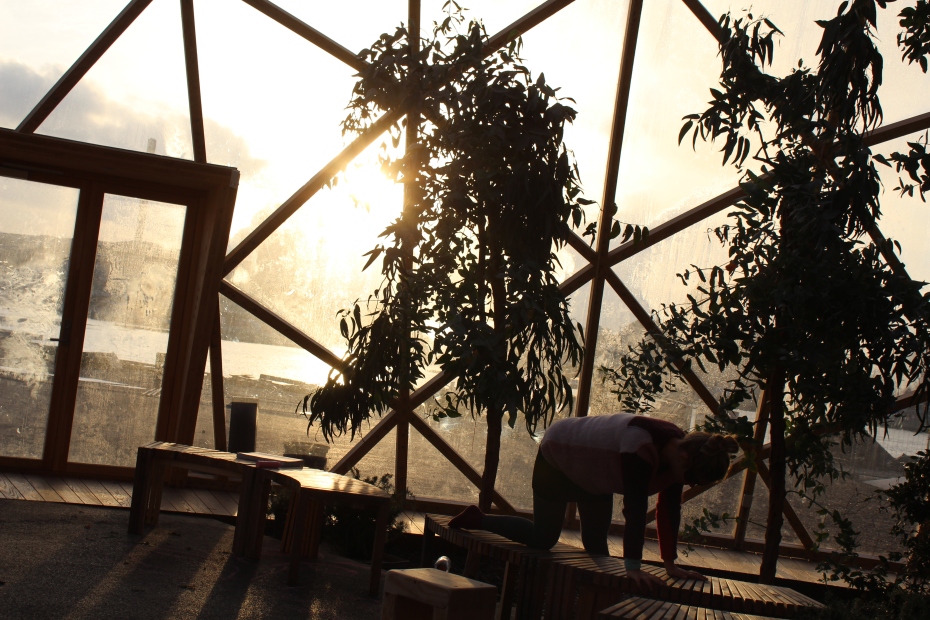 As the core of the lab was to investigate relations between sense-making and data, a high emphasis was laid on attempts to capture our emotional modes of behavior and experience through various more or less technological devises: All workshop participants carried a GPS tracker and heart rate measurer around their wrist. Tons of photos and film was taken.

As Allesandros toolkit was itself a form of (embodied) data capturing, his work was in itself a mix of sense and data.

So our experiments of pairing the field of impulsive body actions and technological data collection was focused on the Sensescapes workshop, where Urban Goods facilitated a feedback session after the blindfolded explorations. By the end of the workshop, the pairs first talked freely with each other abour their journey, departing in the first three words that came to their mind. Then they were presented with a map of their movements, and encouraged to compare it with the emotional journey they had been on together.

From the perspective of being a participant (I was both facilitating and participating) in the exploration, this tool did not work out very well. The blindfolded participants had no clear memory of where they had been when, and therefore the GPS data first and foremost added unconstuctive confusion to the feedback conversations, as the printed maps created a felt gap between the complex, lived experience and the simplified visual tracking of movement.

From the perspective of being the workshop facilitator, the digital and technological aspect of data collection was not easy to incorporate as in integrated part of the experience. Technical problems prohibited us from presenting the heart rate data to the participants before they left. Feedback afterwards outlined that the massive presence of documentation devises (mostly cameras) was a big disturbance in the impulsive sense-explorers’ game of exploration and play.

On the other hand, a new (for me) and more analogue way of data-collecting showed its potential, as the participants were asked to place stickers on an “emotional wheel” as a way of evaluating their experience. The categories in the wheel we had made beforehand where: Fear, Joy, Disgust, Trust, Disapointment, Anger, Relief, Compassion and Sadness. The task was to pinpoint and rate their emotions by placing 1-3 stickers in the categories they had felt during their walks together.

As the participants placed their lived emotions on the paper, two additions categories quickly appeared outside our wheel: confusion and playfulness. From the experience of facilitating numerous earlier Sensescapes explorations I now understand that these emotion categories should obviously belong in any evaluation toolbox of the sensorial exercise. Yet if our categories where not sufficient, still the weel formed a more nuanced collection and articulation of emotional data than the GPS and heart rate could provide. 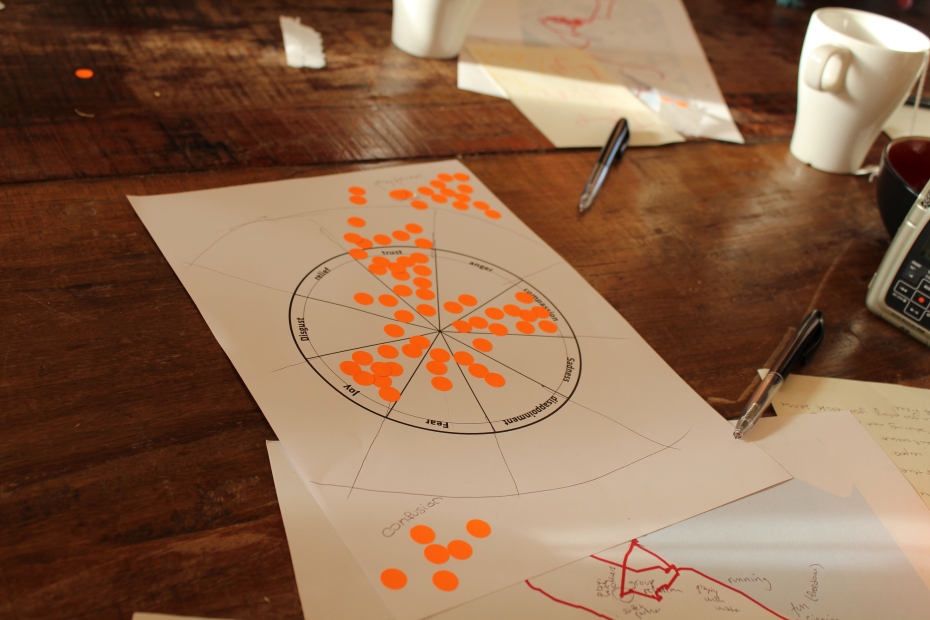 On the third day Sensescapes led a silent walk around the new-built area of Aarhus Ø, which has been subject to local debate for the last years. This walk did not incorporate any digital documentation devices, but afterwards the participants were asked to write down any associations and emotional impressions they wanted to share from their silent experience. Lots of written words where shared and read outloud, underlining a complexity in the group of individual experience, as one participant descibed the feeling of wind and the sound of birds, another wrote about missing Roskilde Festival, and a third posted reflections on the character of infrastructure and buildings in the area.

Wrapping up the three days, Thomas Bjørnsten from Sense of Data led a “micro hackathon” – a three hour debate-based brainstorming of how to create livable cities. Compent voices and clever local minds participated, and made an inspiring ending of the lab, leaving us with perhaps more unsolved questions than when we began. 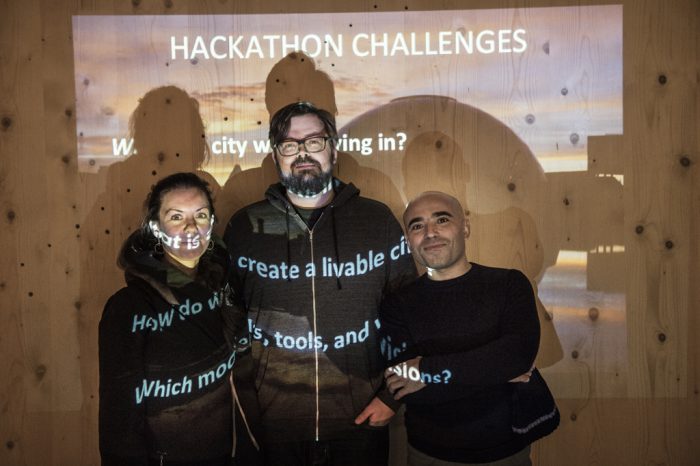 Life flashes by in an instant

Us, them and our bushy dendrites

A philosophical exploration of the potential of combining academia, art and critique

Representations of the Other