Greetings from the late summer forest Risskov, where the performance figure Flora is wandering this month.

Flora is a curious and playful nature explorer, who loves to go for a walk and see what happens. She likes her own company as well as being with other childlike souls.

Come along and get to know what experiences the forest will provide today! 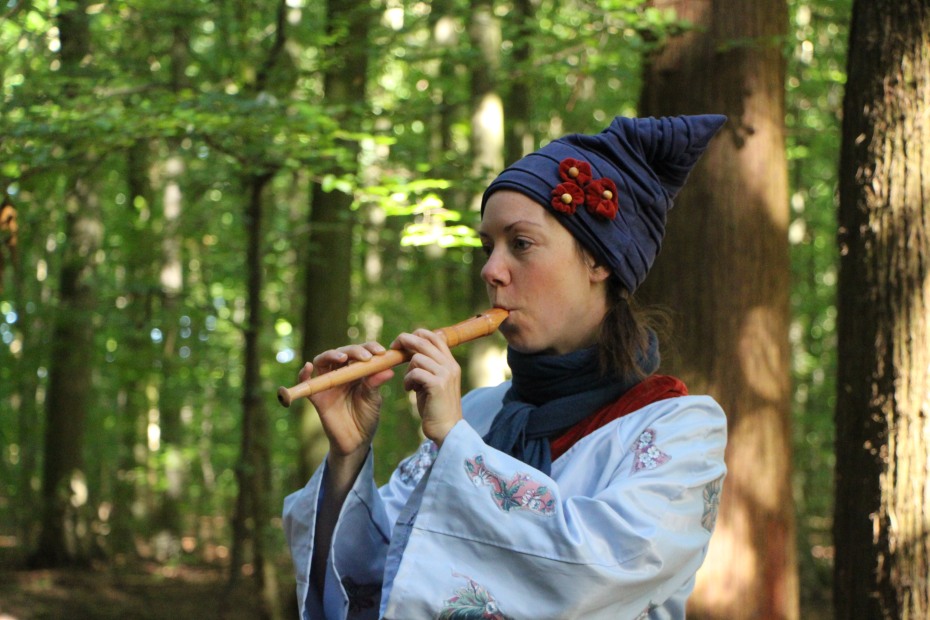 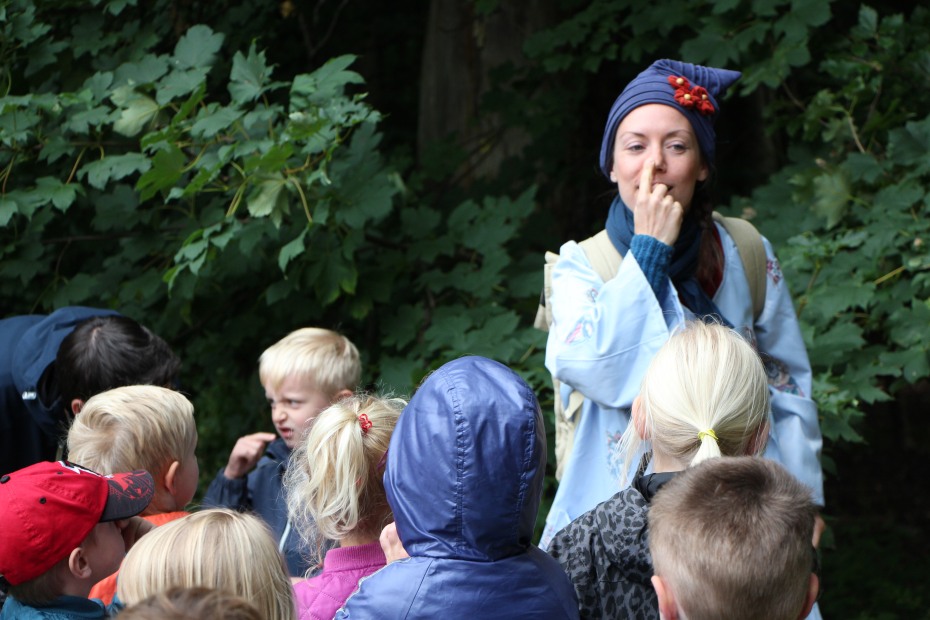 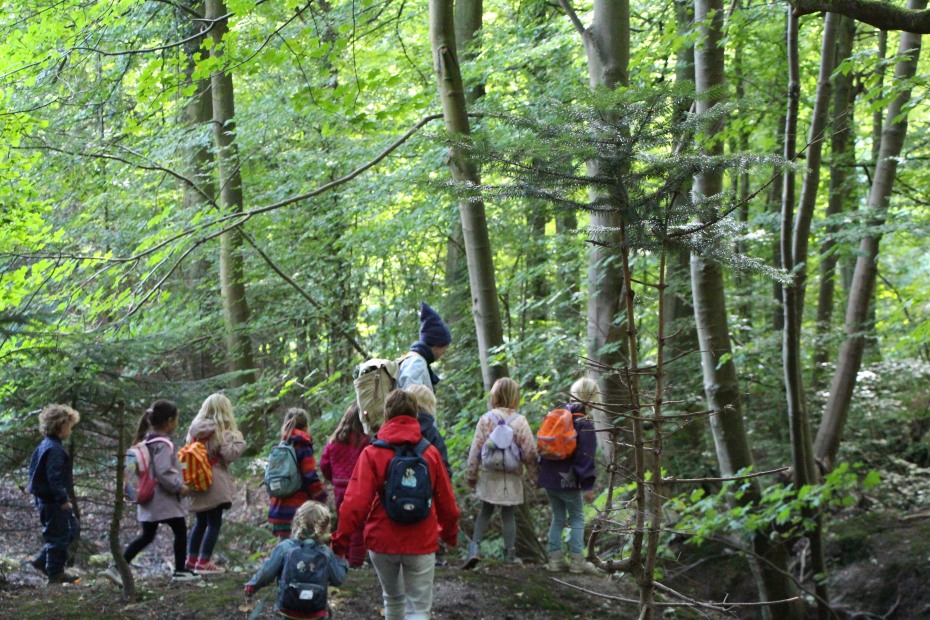 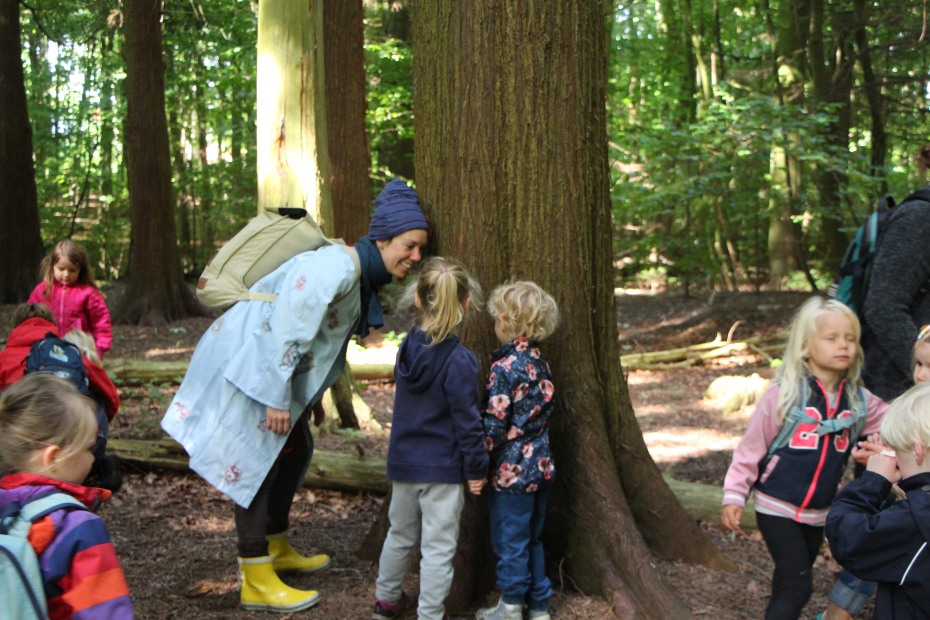 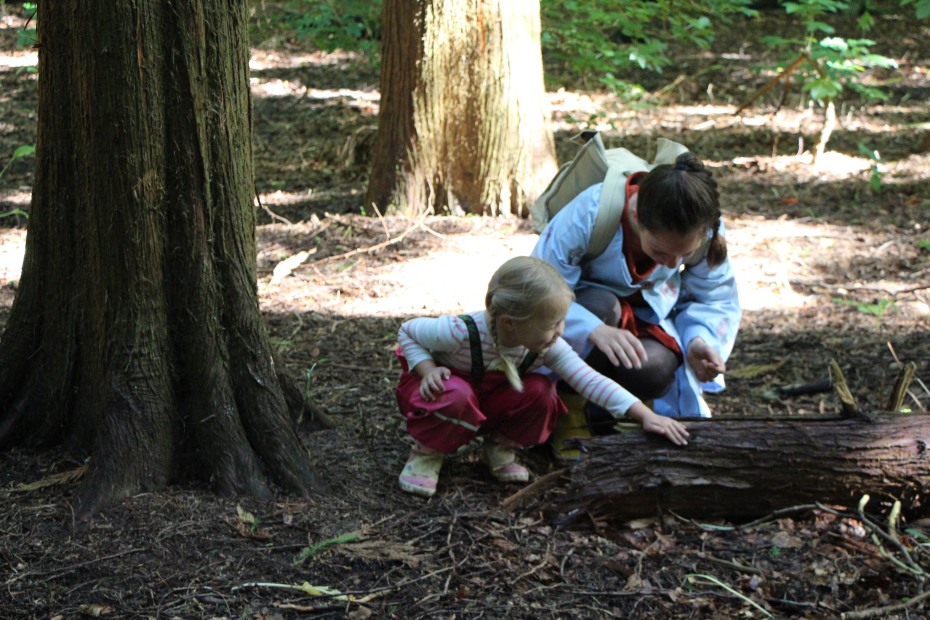 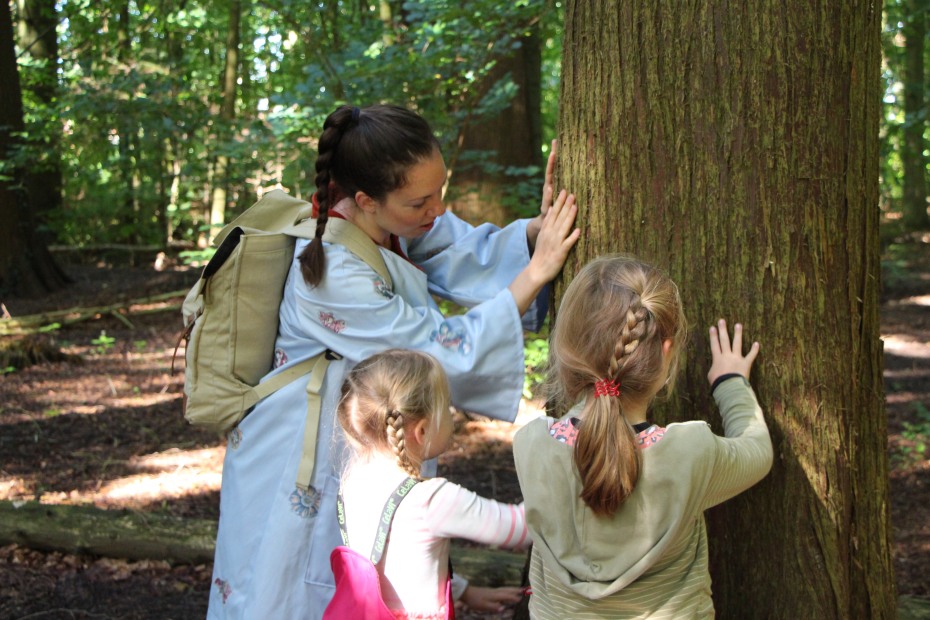 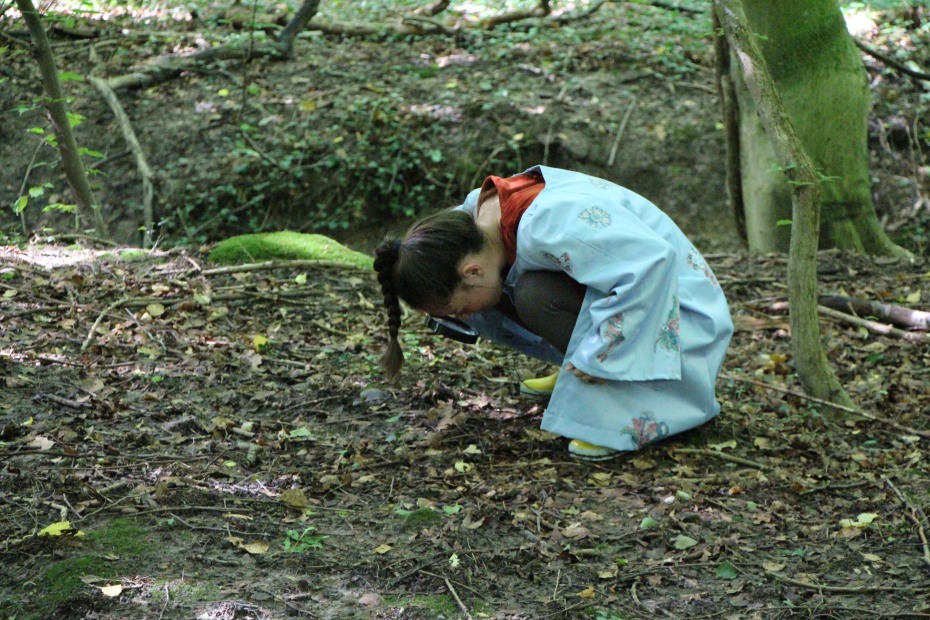 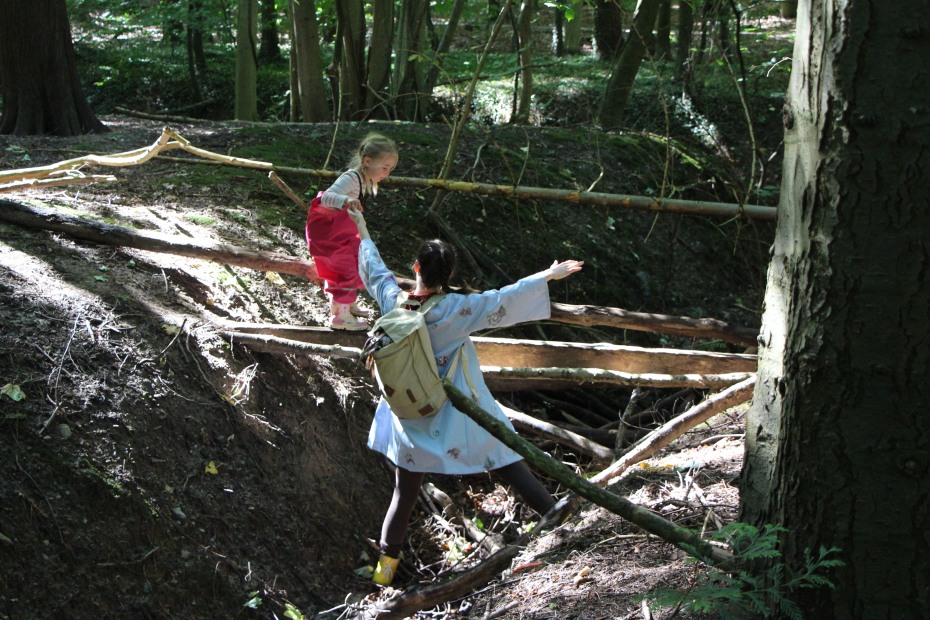 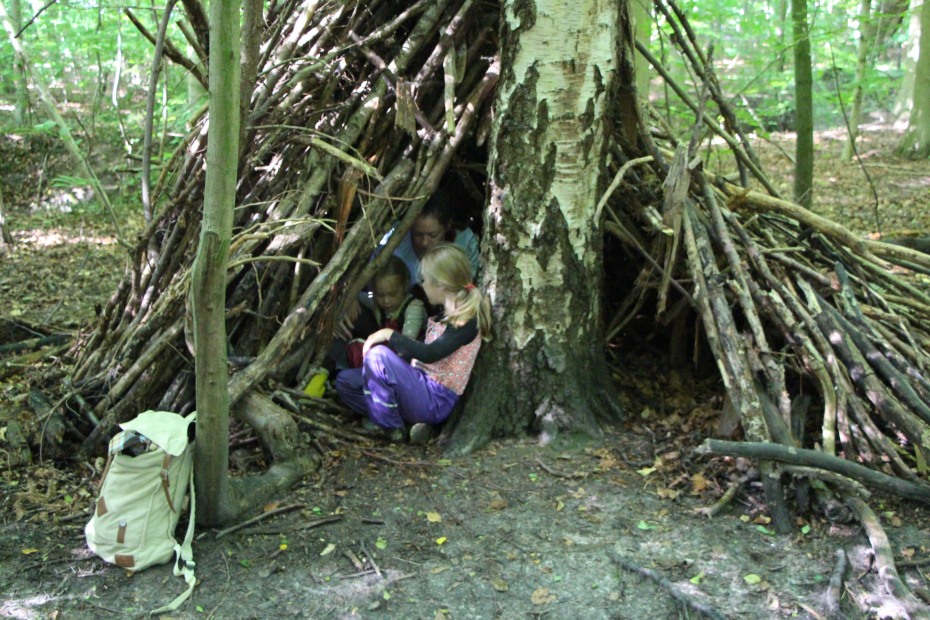 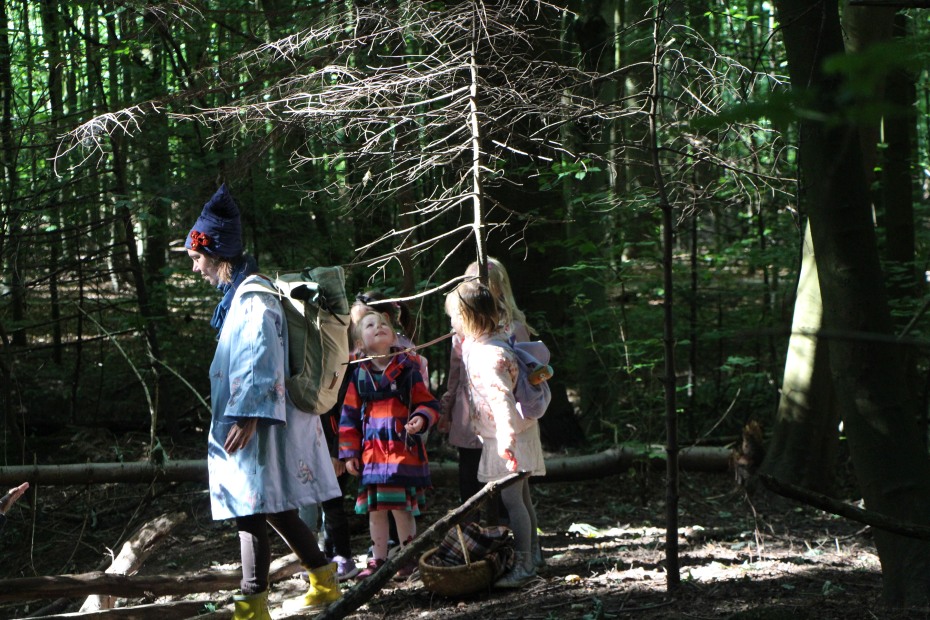 Without seeing you can be transported everywhere

Memories from a workshop session in Barcelona

About a year ago, a Sensescapes workshop was facilitated in Barcelona, in Parc de La Ciutadella, as part of Experimental Room Festival – a festival with human/time/site specific performances and workshops, curated and organized by Atelier Escènic Stoyanova.

Six lovely Barcelonian souls participated. One of them had brought her mother, who had never tried anything like this before. Some were artists in the performance field. Some spoke English, some not, so one of the participants also functioned as my translator.

We had two wonderful hours together. The participants curiously inhabited the park and investigated playful ways of embodied relation to each other, to the ground, the plants, other park guests, and to all other sensorial components in our momentary sensescape.

During our time together, each participant had the change to be led blindfolded and to be guiding someone else. Every exploration session ended with a short feedback, where the participants paused from their silence for a while, and shared three words to describe their immidiate impression of their experience. Afterwards I have had their notes with the three keywords translated from Spanish to English, so today I can re-read what they said.

Here is a glimpse of the atmosphere around our workshop in the park that day. 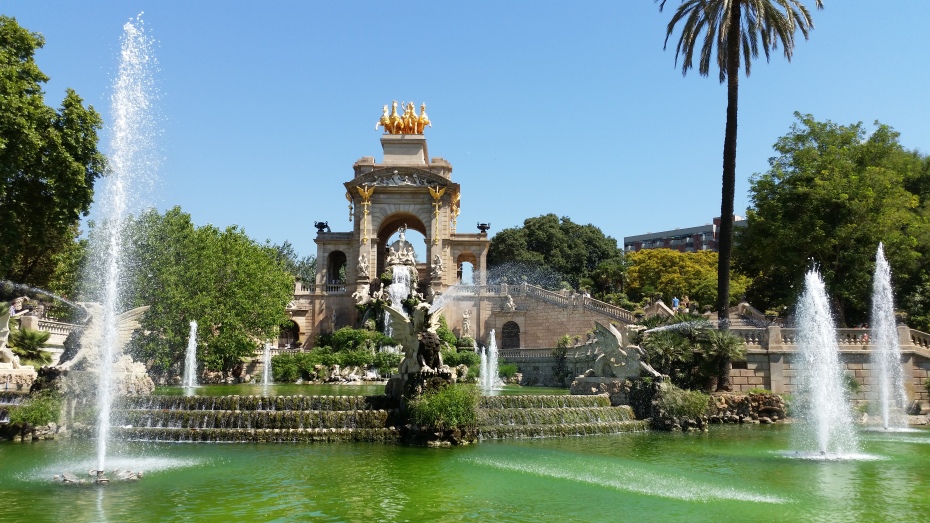 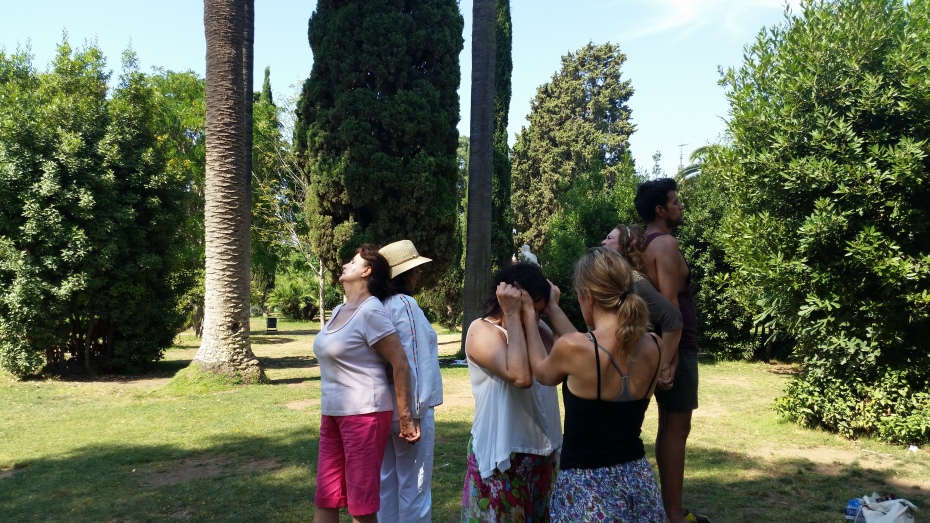 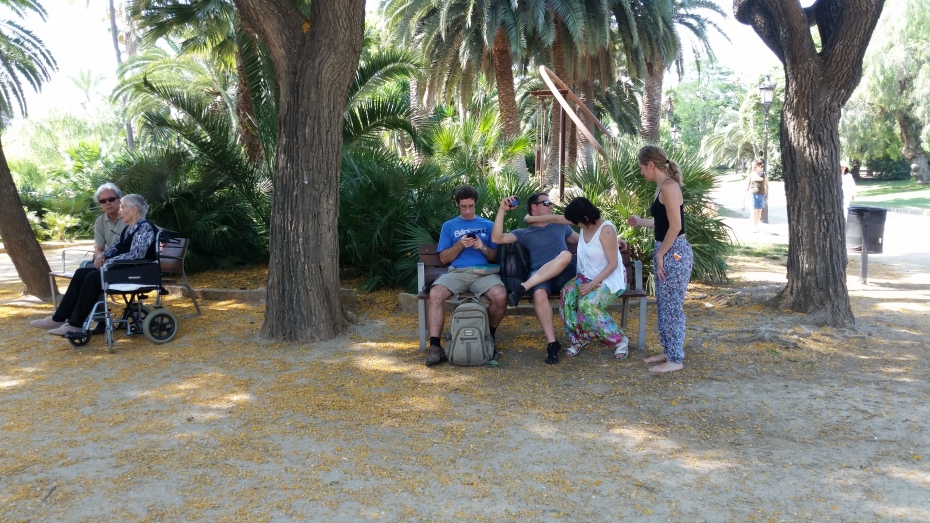 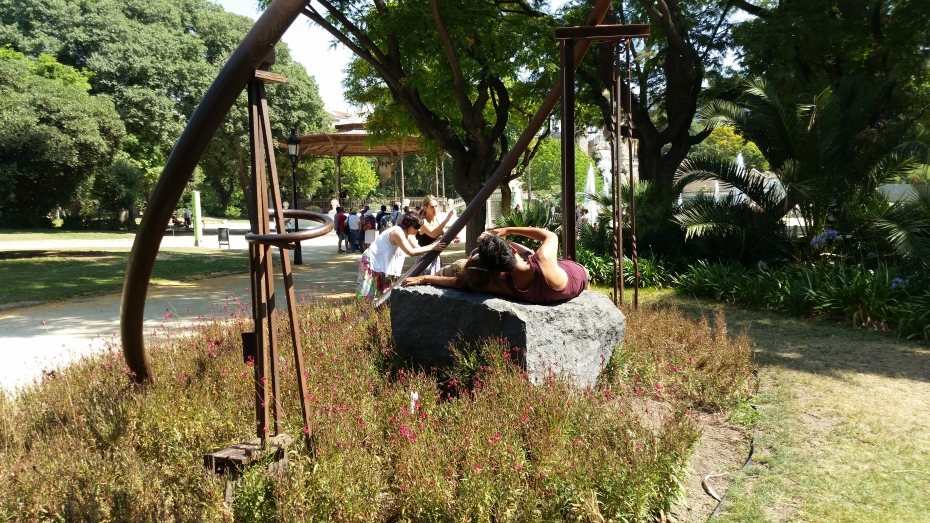 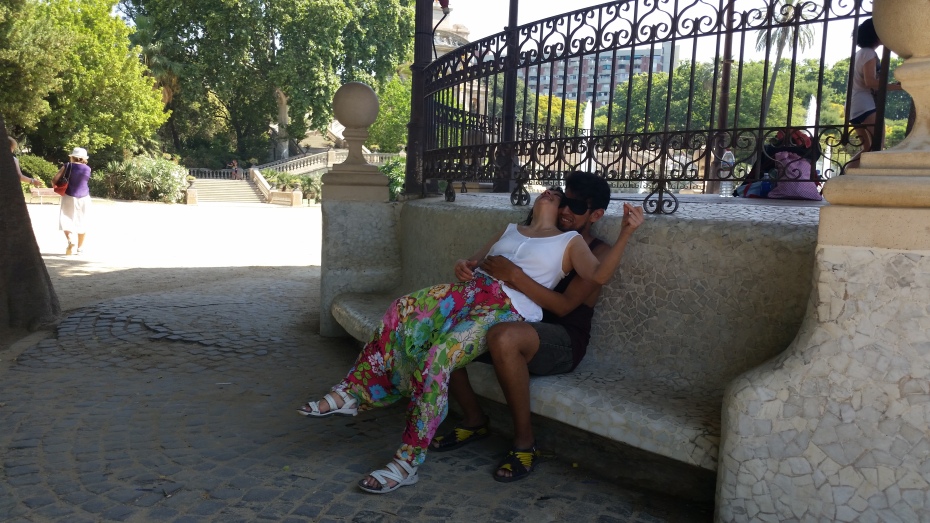 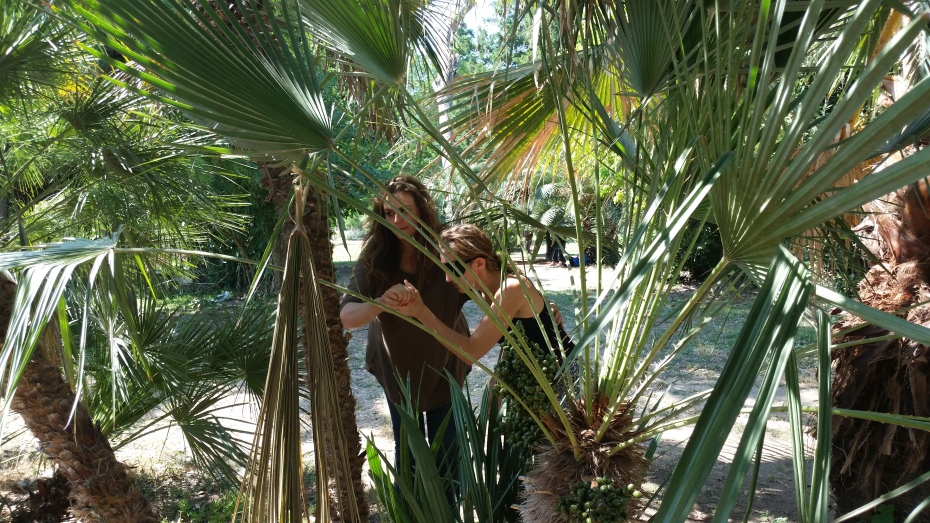 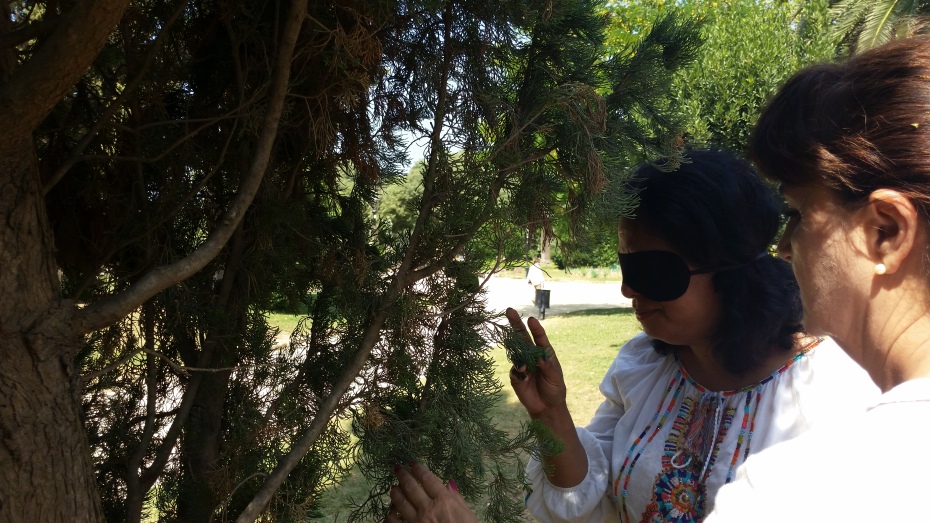 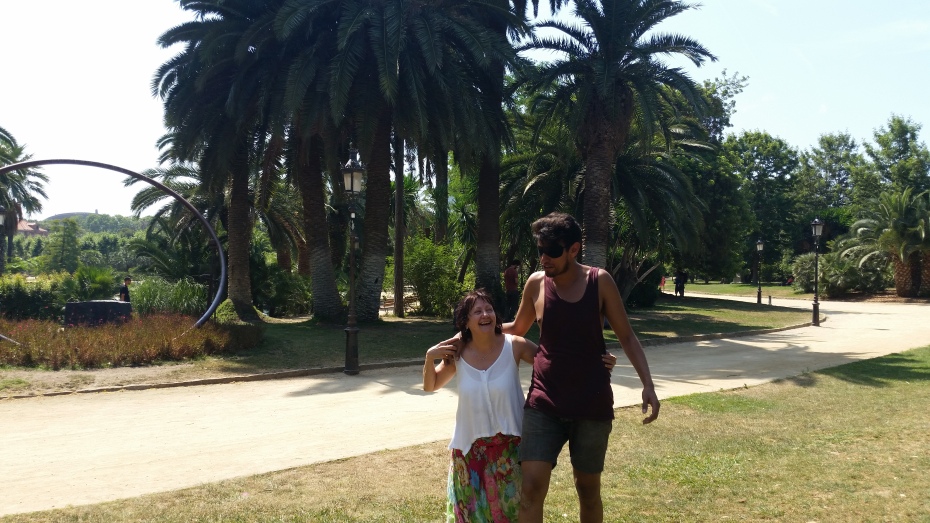 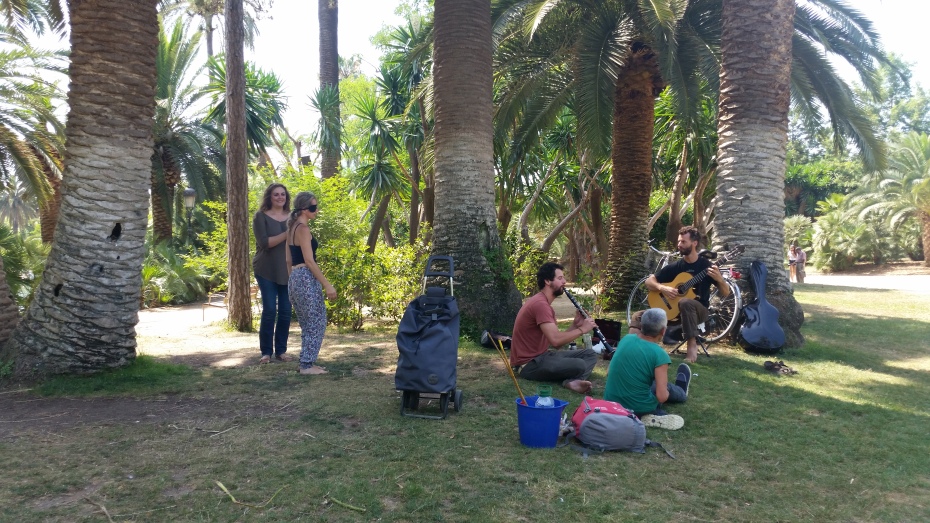 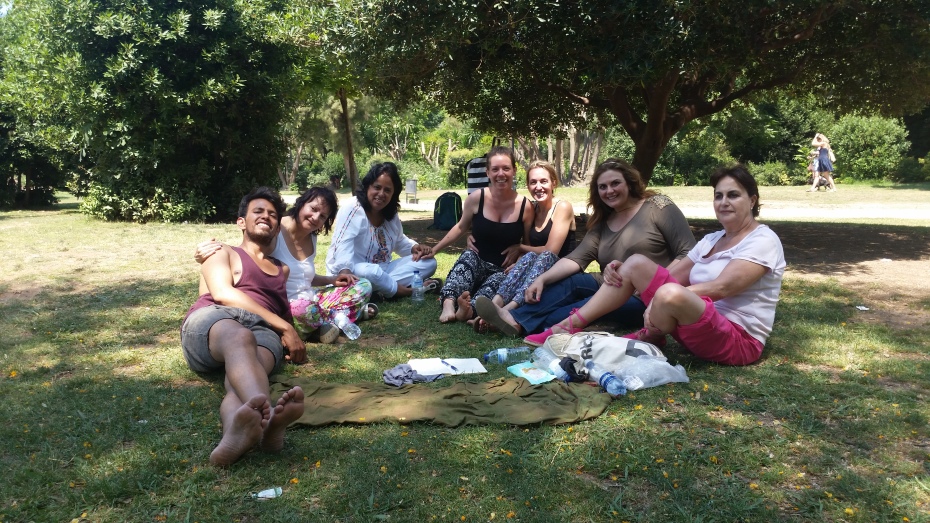 And here are some of the feedback notes: 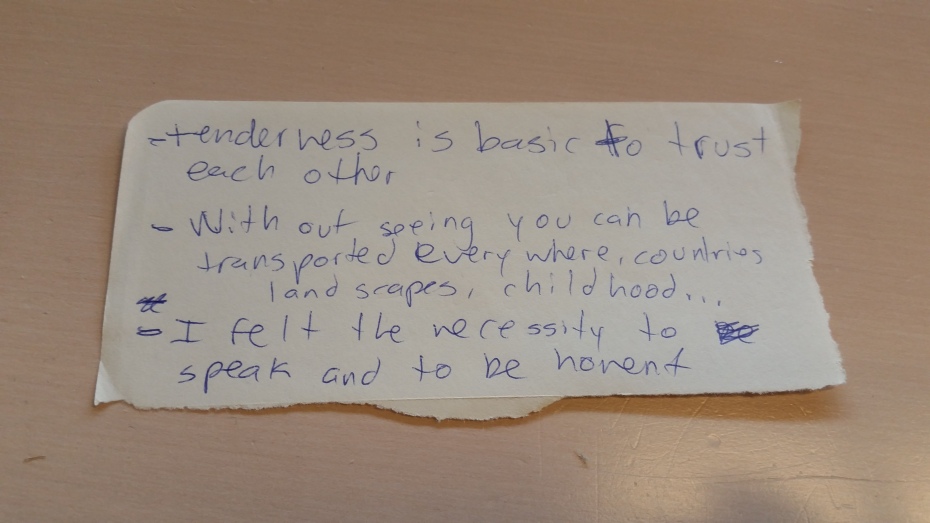 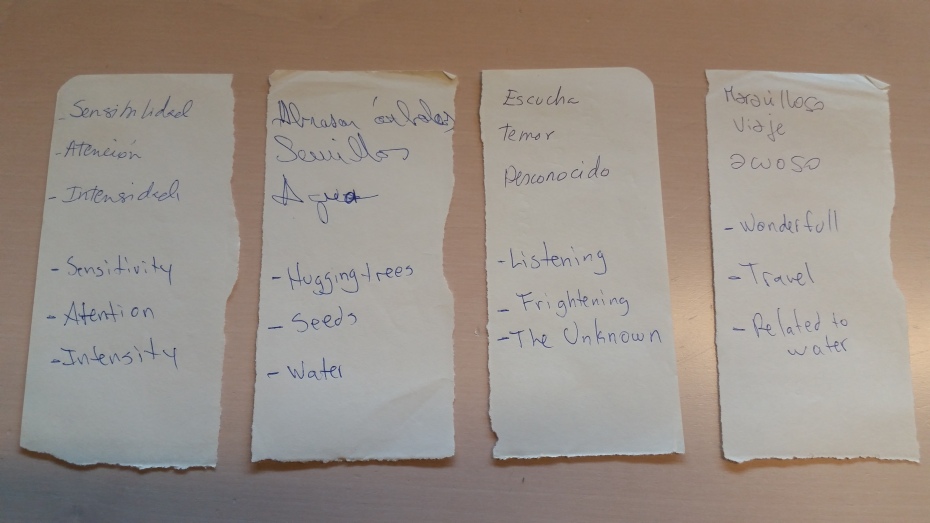 I like the way impressions are mixed and open to interpretation in these feedback notes.

Fantasy, memories, time travels. Why time travels? Because with eyes closed you can be transported everywhere. Countries, landscape, childhood…

The urge to speak and be in contact with something honest, primal and profound.

Thanks to Experimental Room Festival for making this happen. By the way, this years’ festival is just around the corner, so if you happen to be in Barcelona, you might want to take a look at their program.

With hope of many more blindfolded explorations to come,
Lotus

After my last blog post, spring turned into to summer, and in a glimpse of an eye, summer gave way to autumn, autumn quickly became winter, and now my little Nordic country is in spring mood again, with blooming windflowers and days of constant rain-sun-rain-sun-rain…

In all this time, things have happened. Jobs. Workshops. Travels. New encounters. I have become a mother. A newborn life has enriched and transformed the aesthetics of my everyday into tiny sensations. Baby-sensations. A world of experience and learning. A full-full-full-time job. 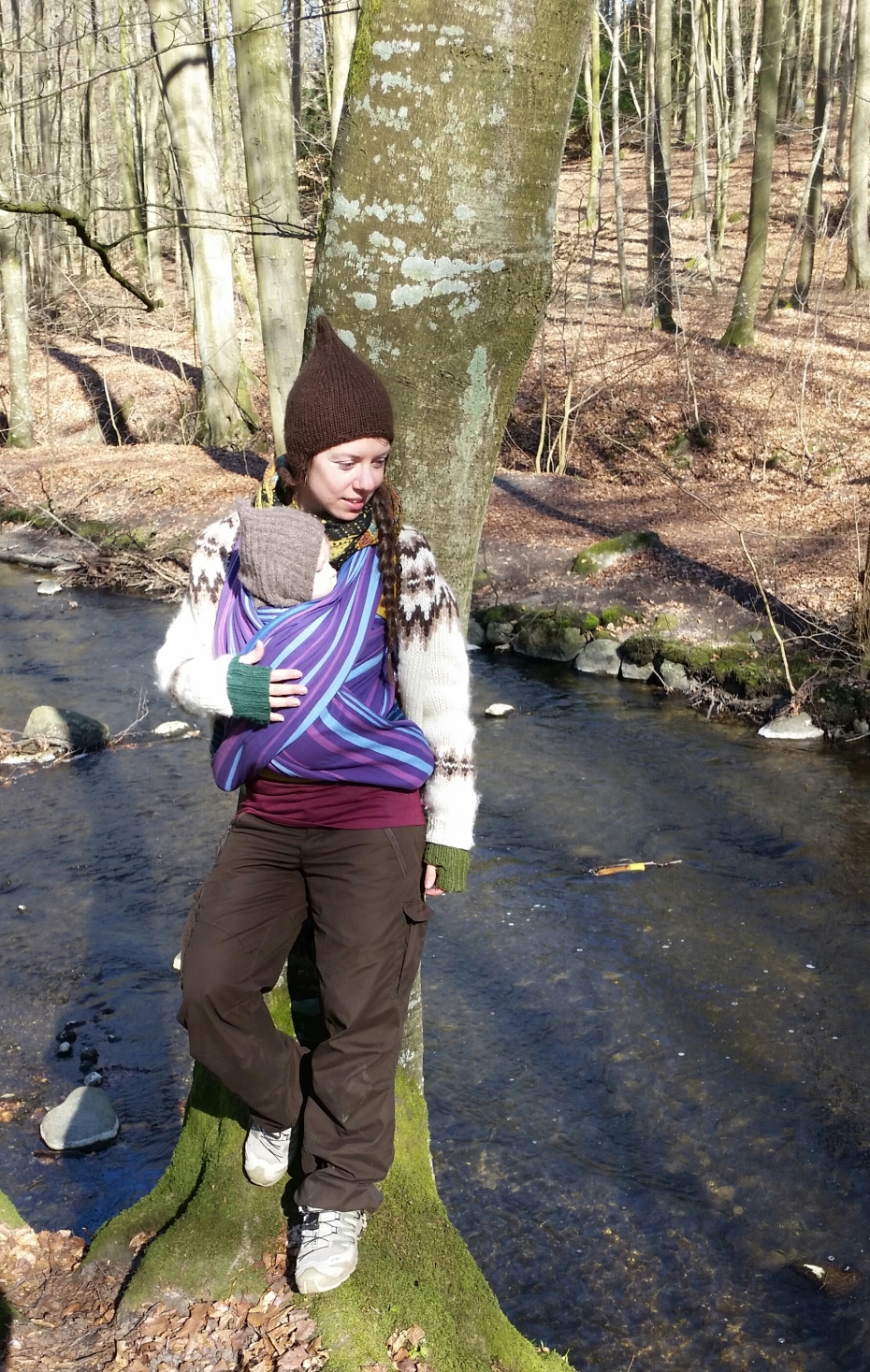 But Sensescapes is not far away, neither dead – only resting, like a sprout in the soil, and I am waiting with eager curiosity for time to be ripe for new actions and reactions in the field of landscapes and senses.

Here’s a reflection of one of the activities done in 2015:

A Sensescapes workshop was facilitated in April ’15, as part of a one-day’s programme in Secret Hotel, on the old farm in Mols Bjerge. The participants were a small group of Master students from a course in Experimental Anthropology, Aarhus University, and their teacher. The workshop was intended as an experiment of Experimental Anthropology in itself, investigating the potential of adding the role of an observer to the usual blindfolding exercise of a guide leading a blindfolded participant in a given landscape. 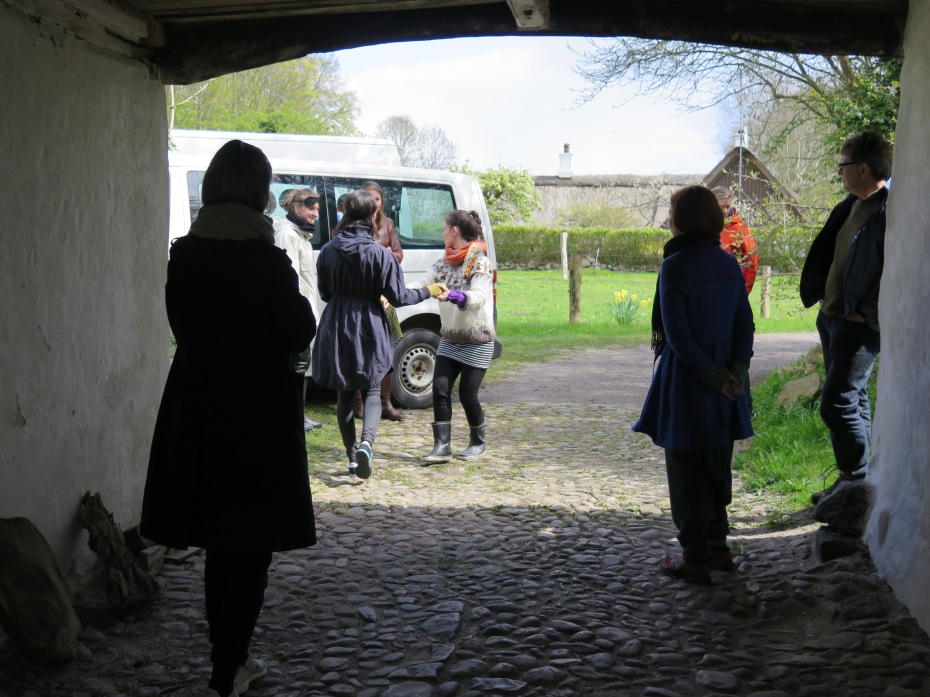 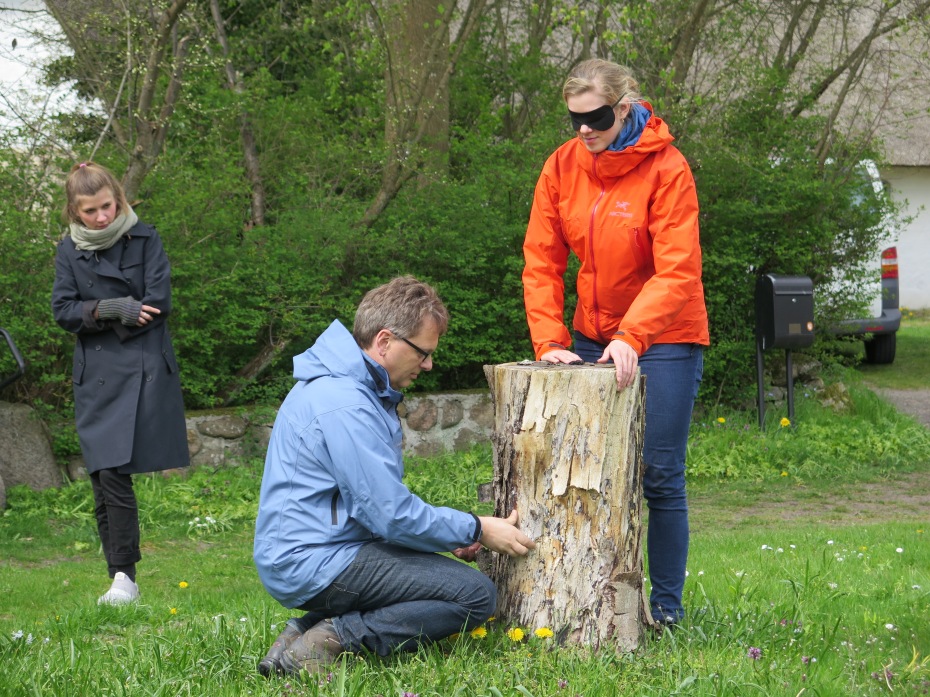 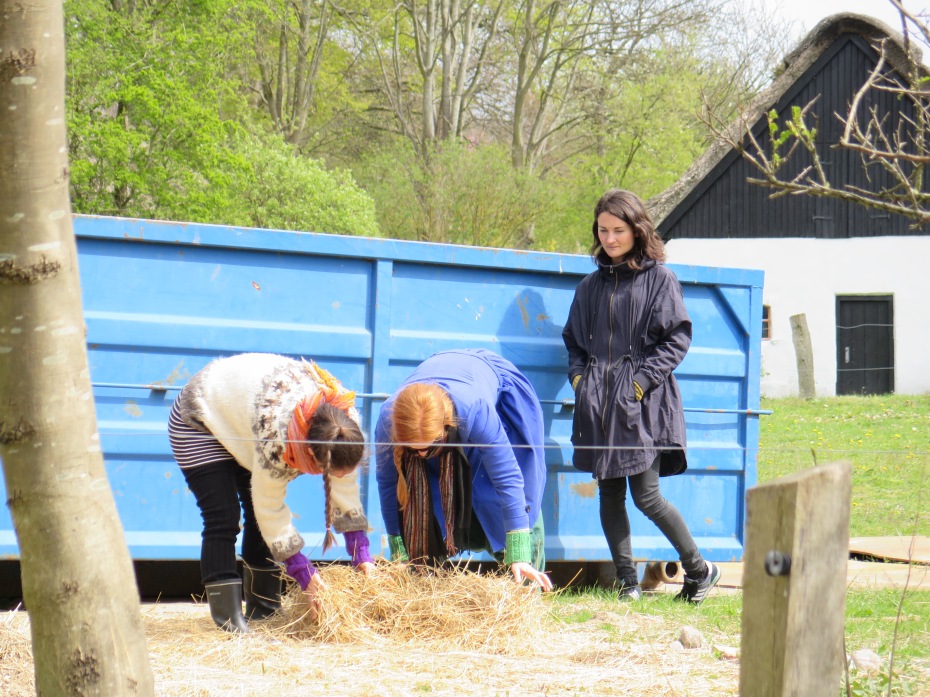 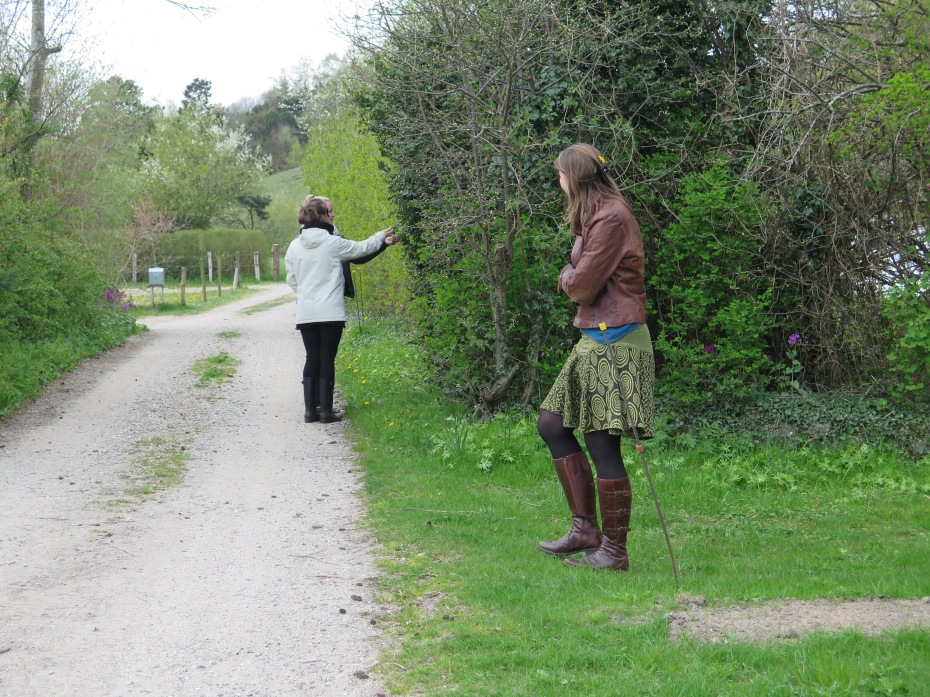 Guide (at the back), blindfolded (in the middle) and observer (in front). Photo: Secret Hotel

With observers as part of the one-on-one practice, a radical shift was created in the character of the concept as I have facilitated it before. First of all, two became three, which makes the relational side of the practice more complicated. But more important, the active bodily sensation of the landscape, performed and experienced by the duo of blindfolded and guide, was now accompanied by a more passive third body, who followed the couple closely and silently.

As the photos show, the observers seem to take a specific position in their engagement with the surroundings. Hands stored away in pockets, bodies standing or walking upright. Yet their eyes carefully follow every action of the investigating couple. Perhaps a tension between intense observation and intense blindfolded sensation was created. Perhaps a double layer of reflection was established. The duo knew that they where being observed, and the observers knew that they knew.

In response to the exercise, I asked each participant in the workshop to share three words describing their experience. Now, an example from this feedback session can open a reflection in relation to the development of the practice of Sensescapes so far:

Lotus: “Write down the first three words that come to your mind, describing your immediate impression of what we just did. Read them out loud to us.”

When I asked the participants to explain their feedback keywords in plenum, it appeared that all the participants, including the observers, has found the workshop fun and interesting. Even if it could feel a little awkward and perhaps slightly intimidating, the observers, felt they had been part of the exercise as well, and they had felt inspired by what they had seen. Thus, a general feedback from the whole group was how they wanted to do something like this again.

Now, if blindfolding can be a direct door to multisensorial encounters with a landscape, how can an embodied position of ONLY seeing contribute to the multisensorial space of here-and-now? In other words: why add an observer in the practice?

For me as the facilitator, the short experiment became a successful statement of how observation cannot and should not be separated from sensation. By seeing, the observer, too, is sensing. Only it is a different sensation, just like the sensation of an audience in a play is different from the sensation of the actors on stage. Still, they are all contributing to the event as a whole. By attaching observers to each couple of blindfolded/guiding explorers, the overall sensescape was not decreased, but expanded. In total, defining three, not two, roles in the exercise, can show how both being blindfolded, being a guide and being an observer can potentially contribute to the creation and exploration of a given sensescape, as a landscape inhabited and experienced through a multisensory mode of being with and in the world (read more on my definition of sensescapes here.)

With the hope of sharing more reflections and actions with you soon,
Lotus

A definition of aesthetic perception

In a philosophy of aesthetics of appearing, the work of the German philosopher Martin Seel draws a line from the notion of interdependent body-world relation to aesthetic theory. By this, a close link between senses, perception and aesthetics is established. In a historical perspective, Seel portraits aesthetics as a philosophical discipline, undertaken in its original form as congnito sensivita – or the discipline of sensuous knowledge, derived from the first definition of the term by Alexander Gottlieb Baumgarten in 1750 (Seel 2005:2). In this manner, the sensuous is the aesthetic and the aesthetic is the sensuous. Aesthetic perception implies “a sensuous alertness, that is an end in itself” (ibid.: xii). This special alertness differs from scientific knowledge, states Seel, and refers to Baumgarten’s suggestion that complete knowledge should consist of both scientific and aesthetic thinking (ibid.:2).

Departing from aesthetic theory’s origin in sense-based knowledge, and following the thought that life gains in different ways from scientific and aesthetic knowledge, Seel present an illustration of the difference between what can be characterized as a detective and a poetic practice. The illustration is this (ibid.:29): A mushroom gatherer is scanning the forest floor. He is paying close attention to multiple appearances, but his attention stays connected to a particular intention: in this situation, to find edible mushrooms. This practice is detective, because it takes the form of a fixed investigation in a search for traces that can lead to a specific goal. Then an aesthetic perciever enter the forest. He is likewise characterized by close attention as he experience things in their particular phenomenal individuality (ibid.:28). But this attention is not directed at distinctions or details in order to find a particular object for a purpose, like edible mushrooms. Instead the aesthetic perception stays intuitive in a sort of spontaneous going-with-the-flow (ibid.:29). This practice is poetic, because its aim is purely to be open to the particular sensations that may appear in each given moment: the grass, the mushrooms, a sudden change in light, the leaves, the wind. The openness in the aesthetic perception can lead back to Seel’s notion of Baumgartens portrait of sensuous knowledge as an undetermined, confused form of knowlegde, and thus “cognito sensivita” and ”cognito confusa” becomes related (ibid.:2). 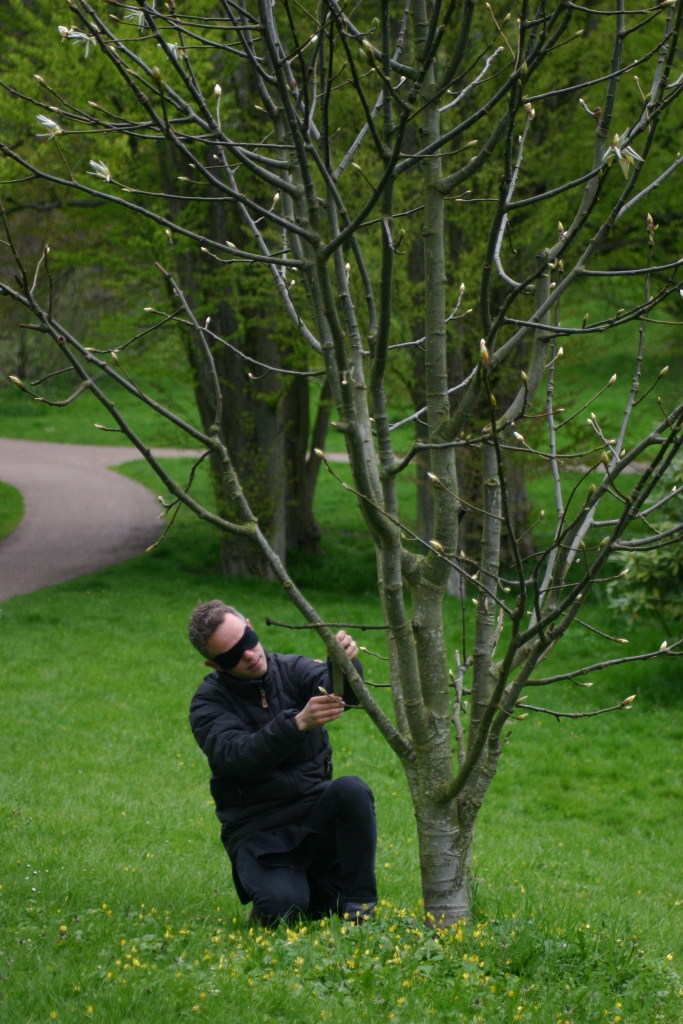 In the movement of bringing aesthetics back to its origin, Seel’s basic concept of aesthetic perception is not only connected to perception of art works, but also to “exstra-artistic phenomena” (ibid.:xii). Encountering the reality aesthetically can thus include nature, design, sports, artistically designed events, and also arbitrary objects in our everyday life – in our life world. As such, my definition of aesthetic perception finds its form with Seel as:“to apprehend things and events in respect to how they appear momentarily and simultaneously to our senses” (ibid.: xi).

In line with a phenomenological emphasis on perception as communication and communion, Seel connects the aesthetic object of aesthetic perception to a relational process, in the manner that such an object ”[…]shows itself in a constantly transitory state. In this condition, nothing is simply just what it is; everything appears in the light of relations that, for their part, change with every change in individual appearances” (ibid.:27). In the aesthetic process of perception, nothing is ever the same. The (or a) phenomenology of aesthetic perception can thus be stated to bring forth a perception of the particularity of the here-and-now, which requires a reconnection to playful, poetic intuition and capability of being present and alive in the moment. And finally, this approach can reach a proposal of the potential of aesthetic practice, as given in Seel’s thesis: “in the multifarious forms of this practice we are drawn into the play for the intuition of presence” (ibid.: xiii). 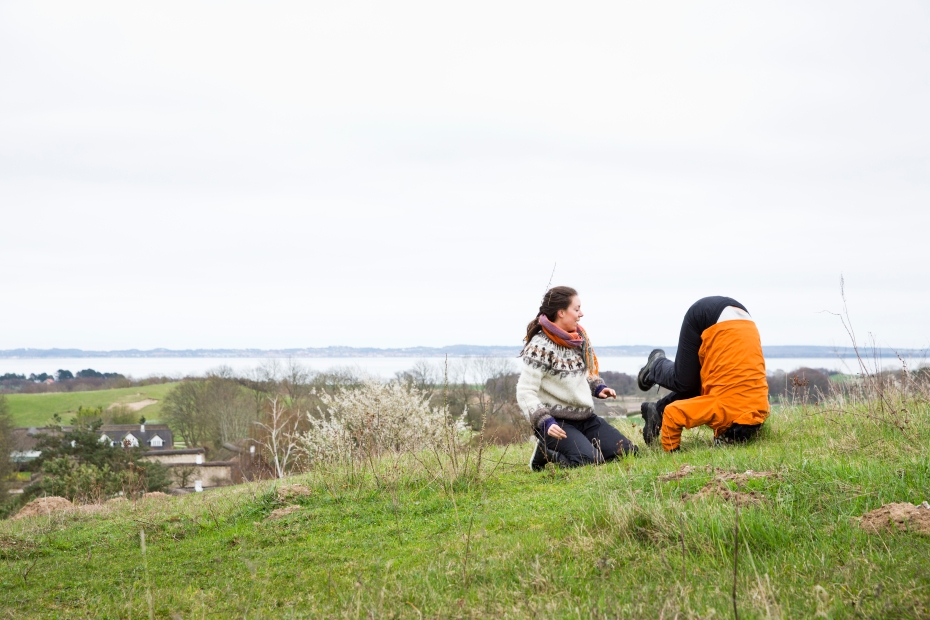 (The text is an excerpt from the introduction chapter in the master thesis I am currently working on, titled: “Sensescapes. The Phenomenology of Sensorial Landscape Connections”)

Life flashes by in an instant

Us, them and our bushy dendrites

A philosophical exploration of the potential of combining academia, art and critique

Representations of the Other